Pong Ball Catapult is a simple one-button shooting game for Android devices with a realistic physics addition. The main goal is to fire ping pong balls from a catapult attempting to shoot as many balls as possible into moving cocktail cups on the other side.

The game begins with 40 balls placed in a big glass pot waiting there to be launched from a catapult. One of the balls is always automatically transferred from the glass pot to the catapult which is placed under the pot. In fact, this is not a real catapult as you may expect. Instead, it looks more like a drinking bendy straw!

On the other side of the playing area, there are three cups arranged in a horizontal line formation moving from the bottom to the top of the screen. These cups are your targets! Shoot and put as many ping pong balls as possible into these moving targets from round to round!

All filled cups return balls to the big glass pot. Any empty cup will be broken! Then a new round starts bringing a new combination of three cups arranged in a horizontal line. They are moving faster with each next round. 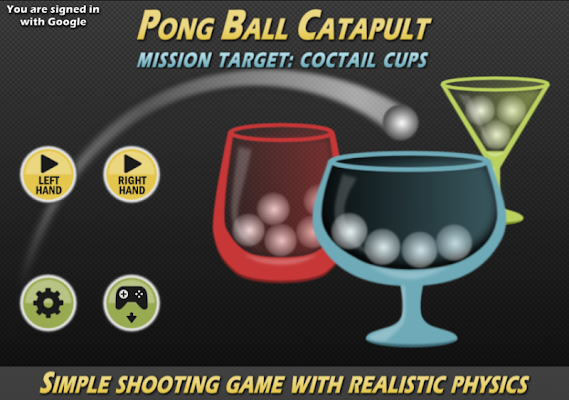 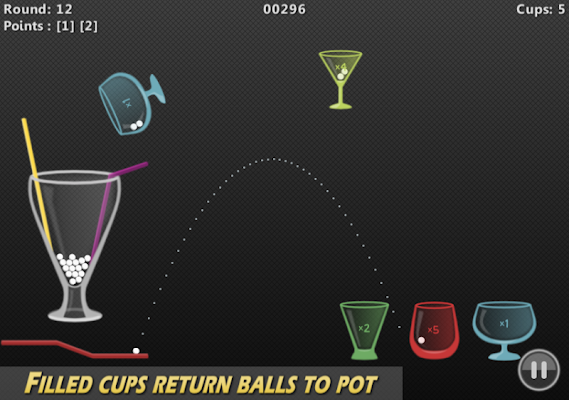 At the start, depending on your preference, you can select either right or left handed play to avoid a problem of overlaying the game screen by your playing finger.

To play the game, just tap on the screen with your finger. Hold down and move it over the screen until you get a desired ball path presented with points of a trajectory line.

When you are satisfied with the predictive trajectory line and ready to shoot the ball, release your finger and the ball will be fired following defined trajectory and the laws of physics.

Number of points you get for a single cup is calculated as the number of balls in that cup multiplied by its size factor.

The multiplication factor is greater for cups with less sizes and it is always drawn on each cup. In that way, you can always know which cup is smaller or bigger than others and how much points you can earn by shooting balls into a certain cup.

The game is over when all balls are lost or 5 cups are broken.

The game is an attempt to make an addictive physics game using Box2d physics engine together with libGDX game framework. It is based on an idea which originates from two other games – Beer Pong and 100 Balls with a goal to make a mix of both games but with a big twist.

For those who don’t know, Beer Pong game is a real game in which the players of two teams throw a ping pong ball across a table with the intent of landing the ball in opponent’s cups of beer. If a ball lands in a cup, that cup is removed from the table. The winner is the first team which eliminated all of the opponent’s cups.

For fans of 100 Balls game, the physics and playing mechanics based on returning balls from filled cups to a big glass pot and breaking empty cups may look pretty similar but this is definitely not a yet another variation of 100 Balls (at least there are no 100 balls in Pong Ball Catapult)!