Sprint Revenge: Knockout Smash is an endless runner sport game for Android devices where your goal is to finish a running race by avoiding all hurdles placed around the track.

You are Baxter The Flying Sneakers, the best marathon runner who won every marathon race he entered. On your opposite side there is Greg The Turbo Leg, the fastest sprint runner on Earth.

The question is who is better – you or he, Baxter or Greg, marathon or sprint runner, long distance terminator or turbo speed machine? 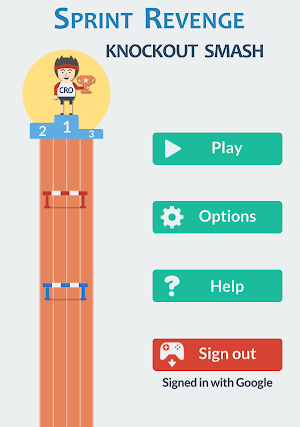 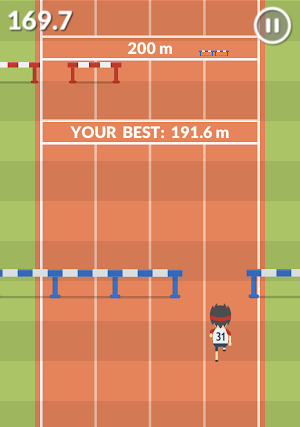 The Sprint Revenge race is an endless-distance running event with an infinite number of hurdles placed around a running track. The hurdles are moving very fast towards you and they are too high to jump over them. Instead of jumping over hurdles you need to avoid them by running through a small free passage placed between hurdles!

Game control is very easy – just swipe your finger left or right to move your runner in that direction.

Sprint Revenge: Knockout Smash is also a quick fun sport game with simple mechanics that can be played anytime and everywhere while lying on a couch, watching television, running on a treadmill, waiting for the bus, sitting on a toilet and so on.

So are you ready for running? Can you avoid all that hurdles? Can you survive without getting a knockout smash and finish the race?

During running, don’t touch hurdles with any part of your body including your famous flying sneakers! Otherwise the hurdles will smash your face if you bump into them.

As a result of such powerful knockout punch, you will be in total disorientation and unconsciousness unable to continue the race. In fact, this knockout smash of your face means a race ending for you and the game is over.