Spring Basketball Arrow Target is a simple one-button sport game for Android devices where you are playing a mini table version of the real basketball but without almost all classic rules. All you need to do is just making accurate shots by finger tapping.

The game is all about shooting to score more points than your opponent. Test your skills against your mobile device or other real live opponents. Improve your basketball shooting technique in single player practice mode.

Enjoy in a fun sport game with a realistic physics environment and a very easy control – just tap, hold and release your finger to make shots!

To play this game you don’t need to be a professional NBA player or a big guru of basketball game theory. There is no need to rebound, assist, dribble and block. Just shoot the ball through the net as much as you can! No fouls, no overtime and no usage of various strategies such as zone defense, man to man defense or pick and roll offense. Just run and gun! 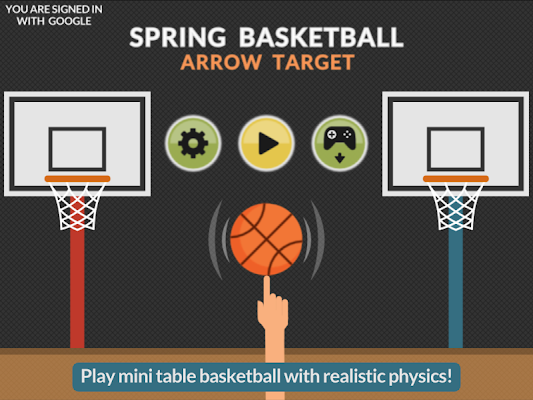 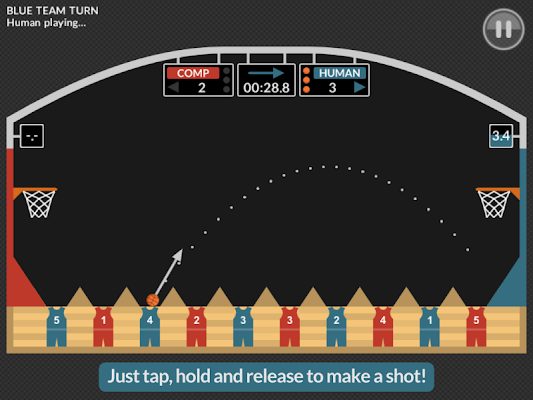 You can select a single player practice mode to sharpen your shooting skills or multi player live games against your mom, dad, friends or any other human being. You can also challenge your mobile device and try to beat computer artificial intelligence. If you win the game playing against the computer AI you will unlock various achievements and get trophies such as gold, silver and bronze cups.

If you want to do absolutely nothing, choose a demo game between two computers AI. Now you can enjoy in professional basketball like you normally enjoy when you watch a real sport match on TV.

After selecting single or multi player mode you can also define a game duration. Here you have options to play a game which lasts 1, 2 or 5 minutes or choose a game with the winner being the first to reach 21 or 42 points.

During the gameplay, a team can score from 1 to 5 points by shooting the ball through the basket net. Shots from a long distance worth more points! To know how much points could be scored, each player of the team has a number on its sport dress as follows:

The main idea for this game originates from an old basketball toy shooting machine which I was playing when I was a kid. The gameplay of that classic toy was based on pressing one of ten buttons to randomly shoot the ball through the basket net.